For over 100 years, the facility at the southwest corner of Washington and Ohio Streets that we know today as The Harper Funeral Home has served as a funeral establishment. Some of the earlier directors included J.H. Arnold, Edison Moore, Ross Joy, and William Blowers. 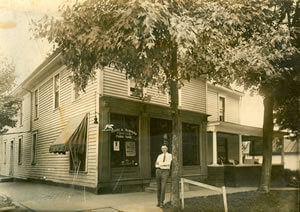 In 1933, John and Willard Campbell of Barnesville purchased the funeral home, and in 1951 Keith Harper became co-owner and director of The Harper and Campbell Funeral Home.

In the late 1950s, Keith and his wife, Winnie Pugh Harper, became full owners of the business and served families together until his sudden death in 1978.

At that time their son, Bob, joined the family business, and only through the kindness and assistance of Vernon "Butch" Rush of the Rush Funeral Home in Clarington, John Hamilton, and Dale Pennell, close family friends, was the business able to continue.In 1982, with Winnie’s retirement, Bob and his wife, Robin Laubert Harper, both licensed funeral directors, purchased the funeral home and continued with the Harper tradition of providing compassionate care for the living as well dignity to the deceased..